← more from
We Stay True
Get fresh music recommendations delivered to your inbox every Friday. 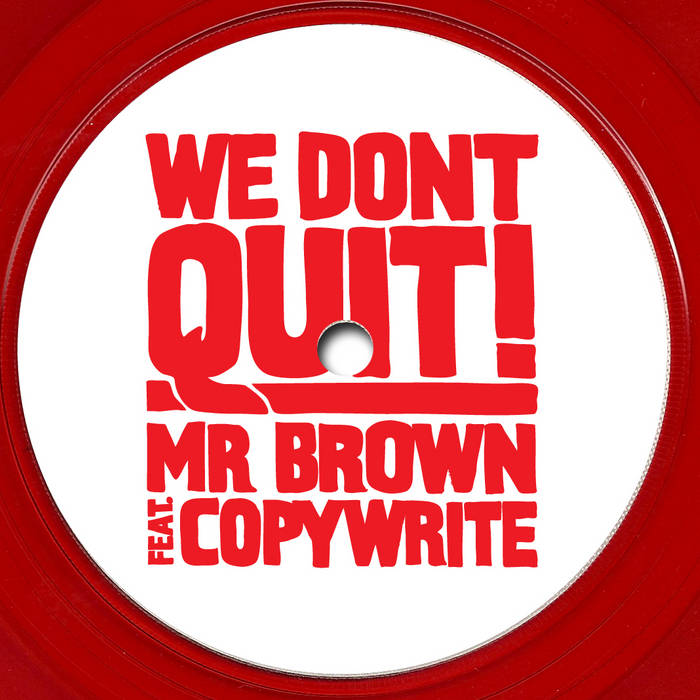 Mr Brown, (UK producer) has been on the scene for a while now, working largely under the radar on various projects and collaborations with artists such as Planet Asia (Cali Agents), MCM, C-Lone, Audit, Conflix & Logan to name but a few.

After the successful release of Mr Browns' debut instrumental EP 'Beats For Days' his next vinyl offering comes in the form of a limited edition (300 copies), hand numbered, clear red 7” and features the lyrical talents of OH 10’s own Copywrite! This song was originally recorded in 2008 and has yet to be released....... until now!

The song is called 'We Don't Quit' and is pure boom bap hip hop through and through. Heavy hard hitting beat, tight scratches and Copywrite coming ripping it up on the sort of beat you rarely get to hear him on these days, basically all the ingredients needed to cook up a hip hop banger! As an added bonus Mr Brown has thrown in 2 extra bonus beats that are exclusive to the 7” vinyl release (please note the bonus beats will NOT be available on the digital download version).

Copywrite, a member of the MHZ (MegaHertz) crew emerged from the underground scene in 1998 along with his group "MHz" with a debut single on Fondle 'em Records called, ''World Premier''. After deciding to pursue his solo career, mainly due to DJ Mighty Mi (a member of the group, High & Mighty) not wanting to sign his group, "MHz", in 2000 he released "Holier Than Thou" with producer RJD2 on Eastern Conference/Rawkus Records. He then went on to release his full length LP, ''The High Exhaulted''.

After many major collaborations with artists such as, J Dilla, Sean P, Royce Da 59, Jake One, J-Zone, Rhyme Asylum, RJD2, to name but a few, the US MC, from Columbus, Ohio has teamed up with the UK producer Mr Brown!

Dj/Producer/Engineer and founder of the imprint We Stay True

Bandcamp Daily  your guide to the world of Bandcamp